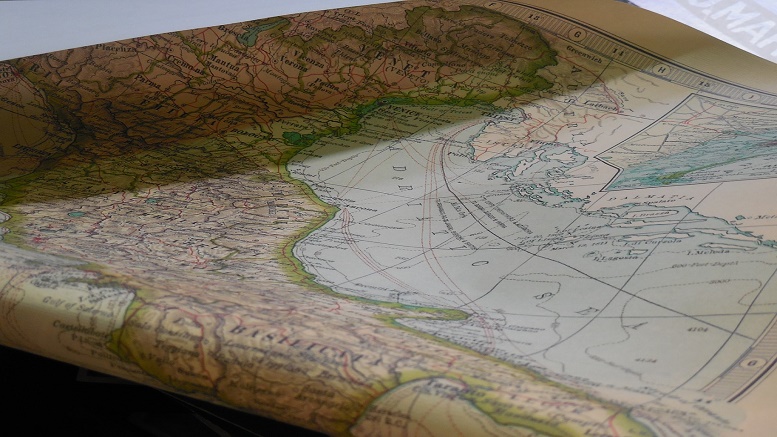 Since the beginning of the human race evolving from hunter-gathers to civilized societies, a very important part of maintaining balance and peace is to make sure there are enough natural resources to keep the population thriving.

In this sense, one might say GIS has always been around. From the time of the Ancient Egypt and the Romans, people have been the most valuable resource to the economy. This allowed them to analyze important statistics related to government, such as taxation. Ancient maps were made using cartography to show geographical areas and populations, even to show where they believed to be dragon lairs for sailors to avoid.

Jump to more recent times, and we can look to the Lewis and Clark expedition as an example of how things have changed little. Lewis and Clark set out to map the entire US from the East to West coasts, which its purpose was to find a direct waterway for travel and commerce to accurately access the resources acquired from the Louisiana Purchase and to establish an American presence in the West.

A century later the first computer resembling modern computers today was invented in the 19th century that led to development of the stored-program concept. Jump ahead to the 1940s when the von Neumann architecture was created allowing for faster, cheaper data analytics. This directly led to the development of the relational database (RDBMS), forming the foundation of a GIS.

The modern GIS is born

Shortly after the creation of the RDBMS, a paper “A Geographic Information System for Regional Planning” was published by Roger Tomlinson in 1968. Tomlin is considered as the father of geological information systems (GIS).

This paper led to GIS, the drawing of layers on glass plates and then plastic sheets laid on top of each other for analysis. Tomlinson took it one step further and introduced CGIS, the first functioning GIS system for Federal Department of Forestry and Rural Development.

By the late 1970s and early 1980s public domain GIS systems such as MOSS, GRASS GIS, Intergraph, ESRI, CARIS , MapInfo Corporation and ERDAS began to emerge as commercially viable vendors for GIS software. They were able to successfully incorporate many of the CGIS features.

This was the first generation of software to separate spatial and attribute information with an integrated approach to organizing attribute data into the RDBMS.

Now with the several mouse clicks users are able to define slope, aspect, topology, hydraulic modeling, geocoding, natural disaster planning and pipeline management. Most recent developments have led to the sharing of this information via web, digital documents, reports and sharing to others throughout an organization. Now, what used to take years to make one decisions or process a simple count or query can be reduced to a matter minutes instead of months or years. These advances make way for fast, informed decision making, and the necessary data, information and knowledge accessible from any computer, on any operating system, various cost points.

The Best Desktop GIS Software of 2016

ArcGIS Online and Moving to the Cloud

Be the first to comment on "Old Science Meets New Technology, A History of Data Analysis"